High Precision Forging
Curved Wave Conveyor
The precision parts forged by the former are conveyed out of the machine from the side of the former by an SP conveyor that prevents damage, then are conveyed to the front or back of the former and will be packed in boxes after cleaning. 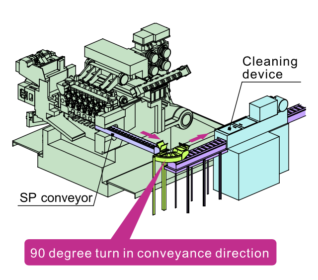 #0(Zero) Station Support System
In the hot forging process, burr could appear on cutoff blank due to wear of cutter knife. SP Conveyor
Forged products land softly on the SP conveyor which helps prevent scarring on products after they are dropped from the tooling or chuck. 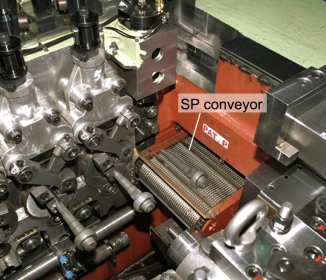 Three-Piece Frame
While the former is running, the frame is warped due to the forging load, and the liner is pulled inward. It is important to have a sufficient amount of strength in the stressed area to help counteract this. 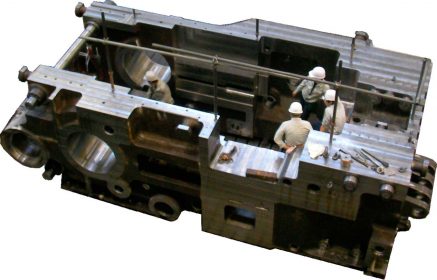 Warm Specifications
Warm forging is suitable for processing stainless steel material. During warm forging, material is heated to 300-750°C before it is processed. However, in a warm former, it is carried out at around 200-600°C. Sakamura formers can be equipped with induction heaters, and warm specifications are possible. Composite Forming
Slug supply systems can be implemented on MPF formers. Composite forming of dissimilar metals (such as nickel and copper or stainless steel and cooper) can be performed. 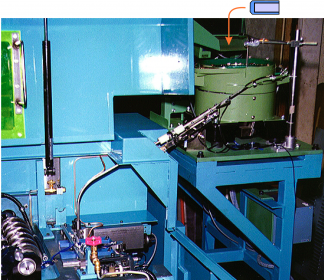 SP (Scarring Prevention) Line
Parts produced by formers are becoming more refined, and net shaping is becoming more prevalent. At Sakamura, a SP Conveyor is being developed to reduce product scarring after being forged.

XY Transfer
The XY transfer turns the formed blank (that was extruded and upset in the X direction) vertically at 90° inside the die. Slug Feed System
The former has a cutoff system inside of it. One characteristic is that coil and bar material are cut and formed immediately without having intermediate stock. It is also possible to supply slug material. Refeed System
The refeed system is a complicated, highly-accurate parts forming system. In the former, cutoff, preforming, and piercing occur. Die Block Temperature Adjustment System
When a former starts running, the die block is heated and thermal expansion of tooling occurs.
Therefore, until a set temperature is reached, variations in the blank’s measurements can be seen.
With the die block temperature adjustment system, a high-powered heater is installed within the die block. Individual-type Die Block
With the individual-type die block, the block at each station is independent, providing a gap.
Because of this, the influence of the heat generated during forging is suppressed from reaching the next station.
In turn, thermal expansion of the entire die block can be controlled.  This, in conjunction with coolant oil pipes within the die block, creates efficiency. Servo Former
In a servo former, the ram slide speed and pressurization speed can easily be set by the servo motor.
By utilizing the features of this servo, you can expect the results listed below. Impact Cutter Structure
By having an impact gap, the cutter’s initial speed is increased, making the cutting speed two times faster than the usual cutter system. Due to the cutter’s high speed, cutting accuracy can be improved. 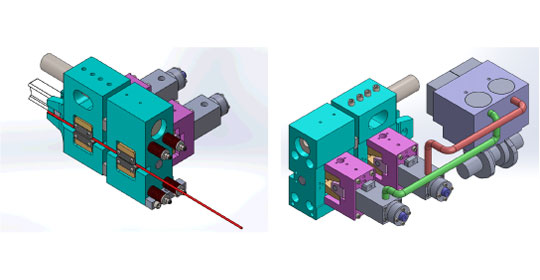